Last week, we did a fun biographical sketch of Glenn A. Britt, Timer Warner Cable CEO, Dartmouth graduate, Obama lackey, and diversity hound. This week, we take another journey into the lifestyles of the Cathedral’s rich and famous. 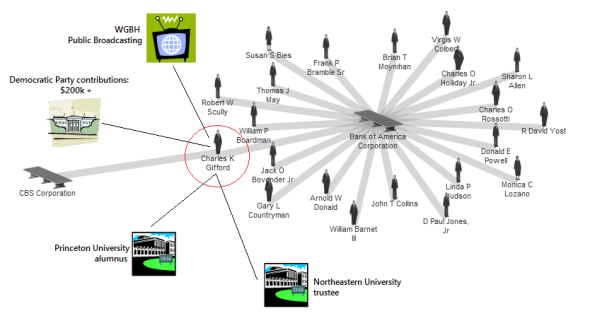 Charles K. Gifford, son of a wealthy bank executive, graduated with a degree in history from Princeton University in 1964. He is a member of the boards of Bank of America (former chairman) and CBS (former chairman). He also serves on the board of WGBH, Boston’s public broadcasting corporation, and the trustee’s board at Northeastern University.

Over the last 20 years, Charles K. Gifford has given over $200,000 to Democratic politicians. Among his largest donations were gifts of $28,500 to the Obama Victory Fund and $15,200 to the Democratic National Committee. But he’s not all about mega-bucks donations. Our man Gifford spreads his wealth around to the little folk, too. He especially seems to enjoy funding Democrats who live nowhere near his home state of Massachusetts. (Someone’s mommy never taught him to mind his own business.)

When he isn’t giving money to left-wing Democrats, Charles K. Gifford enjoys heading the Boston Plan for Excellence, an organization dedicated to training teachers to deal with Boston’s urban NAMs so the manjawed Bryn Mawr grads don’t high-tail it for the suburbs after a semester. As BPE puts it: “[We] recruit highly talented, diverse people who are committed to becoming urban teachers and provide them with a year of intense preparation based in the classroom.” (Loving diversity and being a rich board member go together like wine and cheese!) At a more general level, BPE spends lots of money trying to figure out why Boston’s urban schools suck. To its credit, BPE receives most of its funds from private sources, but in 2010, under Charles K. Gifford, BPE received a $5 million federal grant—I guess the corporate sponsors aren’t seeing results! Under Gifford, BPE has also partnered with the Fund for Teachers, “an organization that normally receives a substantial part of its support from a governmental unit.” What does the Fund for Teachers do? Read some examples here. Clearly, Gifford knows how to take care of funds and spend money wisely. He is a Bank of America executive, after all.

Charles K. Gifford. Who ever said a degree in history won’t take you places?!

This entry was posted on July 9, 2013 by Scharlach. It was filed under Uncategorized and was tagged with Cathedral Profiles.